It was around 9:00 in the morning. Since it was a weekday, no one was left at home except the boys and my brother who was sleeping soundly when the boys started barking loudly as if waking him up. Navy started pulling his comforter and Hunter kept on barking continuously. Since the boys wont stop barking, Don woke up to check what was going on and saw that the electricity outlet was already burnt. If not for the boys, our house might have been caught on fire.

You might be curious why we call our little heroes "furry", let us introduce our baby boys: 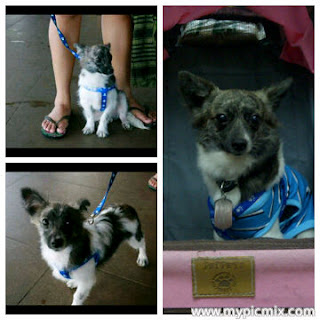 Navy Blue: Our eldest. He's 1 year and 7 months old. A cross breed of a Japanese Spitz and a Shih Tzu. A friend gave him to us when we were ready for a pet. Talk about "blessing" :) He is the most dominant and very protective of us. He is so attached to us that we need to bring him along whenever we go out of town or else he won't eat until we arrive. He acts like a human too. He sleeps on our bed, he cries when we leave him at home, he dances when he hears the song "Teach me how to Dougie" and gets scared when someone is shouting. Though we deny it, he may be our favorite. Maybe because he's the eldest and we got Hunter after a year of enjoying him. 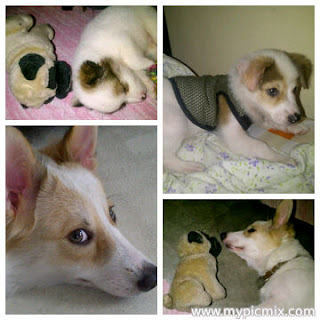 Hunter Green: Our bunso. He's 8 months old and the biggest among the two. A cross breed of a Japanese Spitz and a Pomeranian. Hunter is supposed to be a birthday gift for my mom but we learned to love him even before my mom's birthday. In the end, we decided to just keep him. Hehe. He may be the biggest but he is the sweetest. He would transfer beside you in the wee hours of the night and would allow you to embrace him. Whenever we arrive from work, he would not stop wagging his tail until he gives us a kiss. And with those eyes, who wouldn't fall in love with him. :)